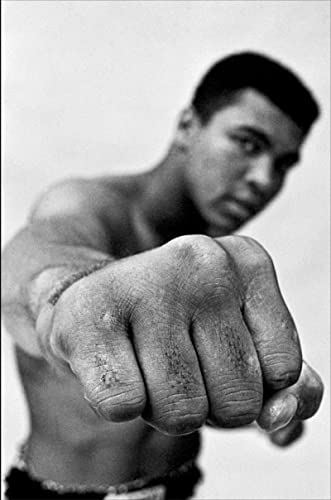 This specific ISBN edition is currently not available.

View all copies of this ISBN edition:

The definitive biography of an American icon, from a New York Times best-selling author with unique access to Ali's inner circle

He was the wittiest, the prettiest, the strongest, the bravest, and, of course, the greatest (as he told us himself). Muhammad Ali was one of the twentieth century's most fantastic figures and arguably the most famous man on the planet.

But until now, he has never been the subject of a complete, unauthorized biography. Jonathan Eig, hailed by Ken Burns as one of America's master storytellers, radically reshapes our understanding of the complicated man who was Ali. Eig had access to all the key people in Ali's life, including his three surviving wives and his managers. He conducted more than 500 interviews and uncovered thousands of pages of previously unreleased FBI and Justice Department files, as well dozens of hours of newly discovered audiotaped interviews from the 1960s. Collectively, they tell Ali's story like never before--the story of a man who was flawed and uncertain and brave beyond belief.

He was born Cassius Clay in racially segregated Louisville, Kentucky, the son of a sign painter and a housekeeper. He went on to become a heavyweight boxer with a dazzling mix of power and speed, a warrior for racial pride, a comedian, a preacher, a poet, a draft resister, an actor, and a lover. Millions hated him when he changed his religion, changed his name, and refused to fight in the Vietnam War. He fought his way back, winning hearts, but at great cost. Like so many boxers, he stayed too long.

Jonathan Eig's Ali reveals Ali in the complexity he deserves, shedding important new light on his politics, religion, personal life, and neurological condition. Ali is a story about America, about race, about a brutal sport, and about a courageous man who shook up the world.

"synopsis" may belong to another edition of this title.

"Finally Muhammad Ali has a biography as big, complex, and memorable as the man himself--or as close as any book can come. From panoramic views of Ali's place in racial, political, and cultural conflicts, to gripping accounts of his fights, to vivid close-ups of his outsized personality and relationships based on new sources, Ali will fascinate you from beginning to end." --T.J. Stiles, author of Custer's Trials and The First Tycoon

"Some people want to grow up to be an astronaut. Or maybe even president. Or heavyweight champion of the world. I always wanted to be a storyteller. The hardest story to tell is one that's been told and told well before. In Ali, Jonathan Eig, a fearless reporter, as relentless on his turf as Muhammad Ali ever was within the ring, has taken on one of 20th century America's biggest, baddest, most important stories and told it bigger and badder than it's ever been told before. Ali: A Life floats like a butterfly and stings likes a bee. Stop the fight. It's over. Eig in a knockout."--Jane Leavy, author of Sandy Koufax and The Last Boy: Mickey Mantle and the End of America's Childhood

"Ali is a marvelous biography - deeply reported, illuminating, dripping with detail chapter after chapter--in every way worthy of one of the great figures of 20th century America." --David Maraniss, author of When Pride Still Mattered: A Life of Vince Lombardi

"Finally, after so many works focusing on this fight or that, the whole man, the whole life, is presented here. And what a revelation it is--to be able to see how this remarkable man was shaped by his world, and how that world was, in turn, profoundly influenced by this exceptional and complicated kid from Louisville. Bravo!" --Ken Burns

"A warm, compelling portrait of a winsomely enduring man. Eig's richly impressive roster of interviews informs an authoritatively critical biography that is both punchy and sure-footed." --David J. Garrow, Pulitzer Prize-winning author of Bearing the Cross and Rising Star

"Jonathan Eig's Ali is a tour de force! It is an independent, insightful and masterful assessment of 'The Greatest!' Eig's biography puts flesh and bone on Ali's fuller humanity. It is a must read for sports fans, boxing fans, students of American history, culture and religion." --Dr. Randal Maurice Jelks, author of Benjamin Elijah Mays, Schoolmaster of the Movement

"A monumental study the scope of which has not been matched. An utterly absorbing and richly detailed account of the most charismatic and controversial athlete of the 20th century."--Mike Silver, author of The Arc of Boxing

"The first comprehensive biography worthy of this titanic figure. The author of acclaimed books on Lou Gehrig and Jackie Robinson, Eig weaves together Ali's athletic feats, cultural significance and personal journey. Fortified by hundreds of revealing interviews, 'Ali' vigorously narrates the story of the man who transformed the landscape of race and sports . . . Eig paints Ali's bouts with vivid detail and captivating sweep . . . 'Ali' stirs together the sweet and the spicy, the gifts and the failings, the charm and the rage, the grace and the greed, the pride and the ego. Together, they made Ali the transcendent athlete of his age." --Washington Post

"Drawing on interviews with Muhammad Ali's friends, family, and colleagues--as well as recently discovered recordings from the 1960s and extensive FBI files--Eig tells the life story of the legendary boxer, political radical, and hero in all its complexity."--Entertainment Weekly, Fall's 20 Must-Read Books

"This hefty biography may be the deepest dive yet into the life of Muhammad Ali."--AARP, 12 New Books for Fall

"Jonathan Eig's masterful new biography of the champ is both captivating and highly relevant to the current discussions on race in America . . . Eig's boxing descriptions are taut and lively . . . He presents boxing in all of its majesty and violence . . . Muhammad Ali was one of the most compelling figures in the 20th century, and Eig does ample justice to capturing his extraordinary and enduring legacy."--Seattle Times

"'Ali' is a big, fat, entertaining and illuminating read . . . What makes Eig's book stand out is its broad scope, its detailed reportage and its lively, cinematic writing." --Minneapolis Star-Tribune

"Eig's book is a fine read on the great boxer's life, taking him on as he was and always seeking the truth that hits closest to bone. It covers the tumultuous middle, and then the oddly sanitized and bland second half of the American Century, an era in which Muhammad Ali was among the biggest and brightest players on the stage -- living a life that, far from signifying nothing, will in its outrageous grandeur and stunning humanity, stand the test of time."--Chicago Review of Books

"Eig never loses grasp of the basic humanity of his subject, allowing Ali the man to take center stage from Ali the legend. Locked on that purpose, Eig delivers a biography that reflects his subject well--complex but straightforward, human but legendary."--Chapter 16

"An appropriately outsized--and first-rate--biography . . . Eig does a fine job of covering all the bases . . . An exemplary life of an exemplary man who, despite a few missteps, deserves to be remembered long into the future."--Kirkus Reviews, starred review

"Eig skillfully utilizes resources unavailable to previous authors, allowing him to present other aspects of Ali . . . As a boxer, Ali was a combination of power and grace. Eig . . . equals this combination with his blend of research and storytelling. VERDICT: A must-read for Ali fans, followers of the sweet science in general, and those curious about the maelstrom of events that shaped a generation."--Library Journal, starred review

"This evenhanded account will likely be one of the most read . . . Eig has produced a thorough overview of a complex person . . .Sharp quotations and expert pacing make the 600-plus pages light on their feet."--Publishers Weekly

JONATHAN EIG is the critically acclaimed, best-selling author of numerous books including Luckiest Man and Opening Day. He is a contributing writer to the Wall Street Journal and is currently working with Ken Burns to develop a four-part documentary on Ali.

"About this title" may belong to another edition of this title.

Other Popular Editions of the Same Title

Search for all books with this author and title